after half a year of very few peoductions filming due to Coid 19.             Having trouble viewing the site with chrome, please try firefox or safari!

The Modern Theatre / Moderna Teatern is all about film, tv and virtual reality! We have a Icelandic feature in pipeline, with Scandinavian and American actors with a top-notch Hollywood screenwriter as a co-writer on it!

And we just got selected to this fantastic pitch-forum http://thefinancingforum.com/selection with our tv-series ”Finding your way home”, about what the lack of ethics and empathy in a group of tweenies can lead to when there are no grown-ups around. And about finding your way home to your own inner values.

Read more about the productions during 2017-2019 further down.

If you want to know more about the artistic director Jannike Grut go to https://www.linkedin.com/in/jannike-grut-a05aa428/

The Modern theatre produced and played the popular music-theatre ”Harriet L.” by Agneta Elers Jarleman where Jannike Grut played the lead as the poet and painter Harriet Löwenhjelm. The play was loved both by critics and audience. For three years, The Modern Theatre also produced an outdoors theatre piece in Lund/Skåne. A Dickens-inspired, Agatha Christie-kind-of-criminal-comedy that has been seen by over 4000 people! 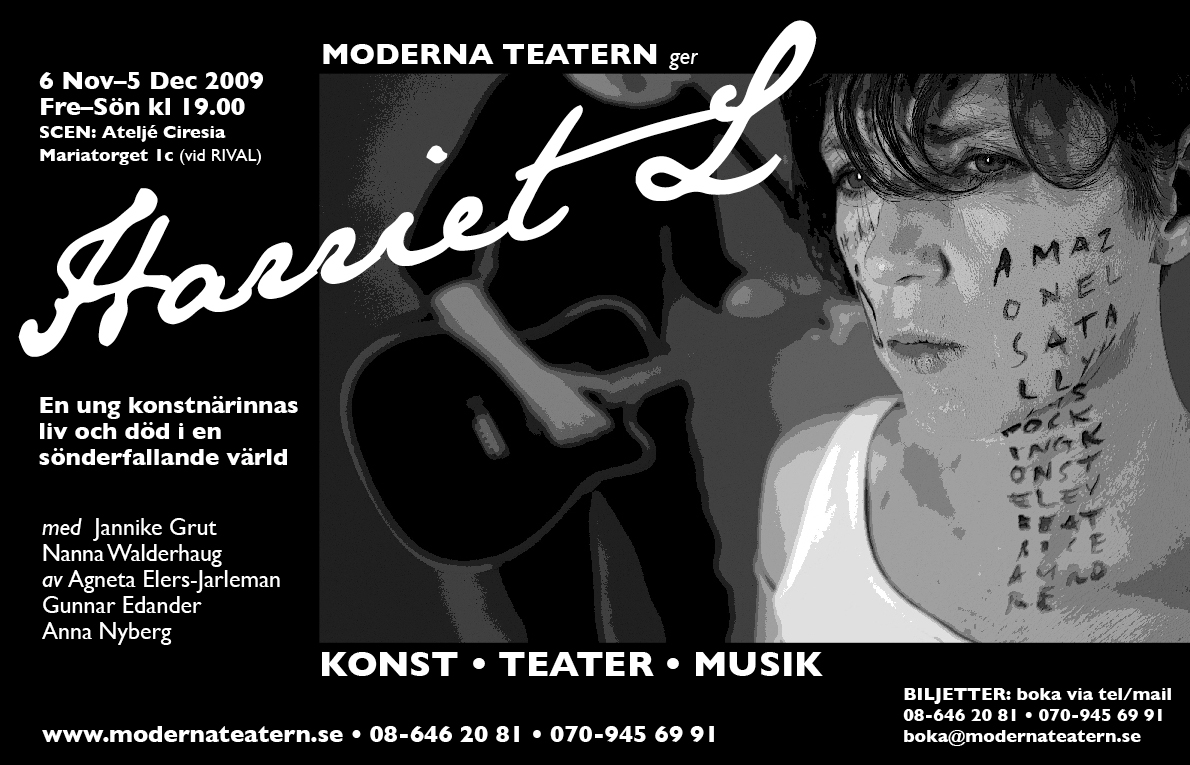 During 2016-2017 Actress Jannike Grut from The Modern Theatre is to be seen in two different tv-series with renowned Swedish comedians like Fredrik Lindström in the series ”Tänk om…” and David Hellenius in the series ”Finaste Familjen”, as well as in the film Trädgårdsgatan / Garden Lane / with the actor Simon J. Berger in the lead. Jannike Grut will also be seen in two episodes of the TV series ”The hitmen”, Torpederna, directed by Måns Herngren. If you want to know more about actress Jannike Grut, go to http://www.actorsinsweden.com or http://www.imdb.com/name/nm0344740/?ref_=nv_sr_

TV/FILM: We are currently also developing the teve series Finding your way home within the Empathy project.

THEATRE: The Modern Theatre produces a Swedish/English theatre tour in collaboration with Unga Roma theatre from Gotland who makes modern and updated adaptations of Shakespeare for a young audience. Updates to come.

WORKSHOPS: Communication training where we work with employees with presentation, communication and empathy training, also has its own homepage (in Swedish) www.actionkommunikation.se

The Empathy Games/Empatispelen – workshops for pupils from age 13 up to high school. Right now this project is performed only in Sweden, and has a website of it´s own, all in Swedish www.empatispelen.se

The Modern Theater is a pop up-theater, without a permanent stage.

The theatre engage actors for stage production, but also for assignments during conferences, seminars and workshops as well as in the planning and implementation of communication training for grown ups in fx. municipalities and in enterprises, as well as for school pupils.

Since 2015 the theatre also produce Empathygames, stories and experiences in VR through Do Good Games, www.dogoodgames.com

Modern Theatre was established in Stockholm in 2006 and then co-produced the show Café Problem, directed by Ulla Kassius and Marianne Goldman, at Kulturhuset. During the 2007/2008 theater played its first self-produced show, Night Sisters, directed by Josephine Lennström.

Harriet L. a play about the Swedish poet and painter Harriet Löwenhjelm, was produced in 2009. Written and directed by Agneta Elers-Jarleman. On Tour 2010-2013. The play has been played in Gotland, Uppsala and Stockholm.

The documentary "Why stay bored when you can leave for more fun!?" about a relationship in a seven year itch, was shown on primetime tv both in Denmark and Sweden during 2012 and 2013.

Mind The Gap - new strategies for a new era, is a form of a series of recurring half day long seminars, about how to and co-operate and produce culture in new ways. It´ pop-ups in different places and spaces around Sweden. The series started as a single seminar during the Bergman Festival at the Royal Dramatic Theatre in 2009, and after that has been in Lund two time on Kulturmejeriet in Lund.